So, after having gained roughly 2 pounds each just from inhaling the air surrounding the gingerbread exhibits… 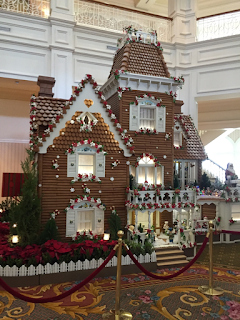 We had lunch reservations and tickets to Mickey’s Very Merry Christmas Party. The Christmas Party, for those unfamiliar with it, is an after-hours event inside the Magic Kingdom, available for a not quite seizure-inducing fee, should you discover you haven’t maxed out your credit yet. Lunch reservations, for those unfamiliar with them, are a kind of appointment you make at nicer restaurants to come by, have a chat with some of the staff, try out the lobby chairs, then after a while stagger away in search of food.

At least that’s what seems likely to happen when you first check in at a popular Disney restaurant. They are generally swarming whatever time you go, including four hours after closing.

Here we are waiting to enter ours. 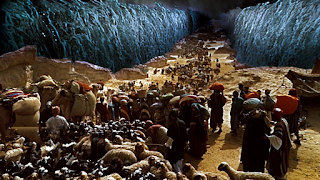 If you are trying to plan ahead and are unsure whether the establishment you are considering qualifies as a popular Disney restaurant, there is a simple two-step test. Step 1: before you enter, check whether the building is located anywhere within 10 miles of the Walt Disney World border. Step 2: after you enter, check whether anyone is eating. If the answer to both questions is yes, it is a popular Disney restaurant.

However, as you veteran Mousekovites know, Disney usually manages to pull off the surprising, and, in our case, we were seated in less than 15 minutes. We were eating at Sanaa, a delightful, African-theme restaurant inside the Animal Kingdom Lodge. Disney bills it as “African cooking with Indian flavors.” Maybe they also have an Indian-themed diner somewhere that serves antelope burgers. I’ll let you know when I find it.

The atmosphere at Sanaa is top-notch. In a helpful example of the always-clever Disney effects department, some of the menu items actually appear outside the windows to assist in making your selections. African Chicken, for example. 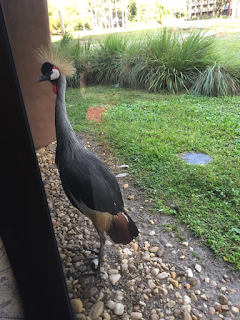 If you are fortunate enough to enjoy a meal at Sanaa, you can’t really do better than to order the Indian-Style Bread Service. The bread itself is called naan. I do not know what ‘naan’ means, nor do I care. It might simply mean ‘bread,’ so that the title is redundant, like how some restaurants serve torte cake. Or it might mean something wholly unrelated to food. If I found out tomorrow, while on my way there for lunch, that naan is Swahili for “rolled out hunk of tree bark often given as a prank to Westerners overeager to part with their money,” I would still order it right after greeting the waiter.

At Sanaa, naan is a circular, flat loaf served with nine different dipping sauces, each very unique and very delicious. 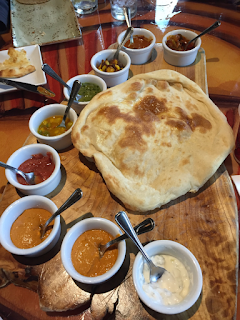 For some reason, this comes, as you can see, on a long wooden board instead of anything resembling traditional serving ware. This could simply be a continuation of the African theme, or it could be that the last joke about what naan means has more plausibility than I am comfortable exploring. So, moving on.

Lunch was our last major event before heading to Mickey’s Very Merry Christmas Party. One of the selling points of the party is the non-stop hot chocolate, hot cider, candy canes, cookies of various kinds, etc., served all over the park. While nice, this presented a dilemma for my family. At the time of our trip, we were battling several food allergies, the total list of which meant we as a group were allergic to roughly 85% of any given grocery store. This meant two things: 1) the plumbing in my house was seriously earning its keep in those days, and 2) three of us couldn’t eat a single thing served at the party.

Enter the head chef of Sanaa; a fine gentleman by the name of Eddie, pictured here. 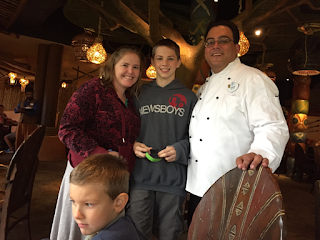 (As a side note, the little one in the bottom of the picture is not scowling because of Eddie. He’s a big fan of Eddie’s work. I don’t remember precisely, but I think he was mad because we had cut him off after his fourth serving of Butter Chicken.)

Anyway, my blogette had gotten to know Chef Eddie a little on a previous trip, so she contacted him in advance of this one to see if he knew any chefs working in the Magic Kingdom that we could ask about special ordering allergy-friendly snacks. Eddie did us one better. He insisted on making something himself. That was surprising enough, but even more surprising was the bulging bag he brought out that contained a thermos of hot chocolate, brownies, chocolate covered strawberries, and an assortment of various other treats, all completely allergy-friendly. He made each one himself, from scratch, for not one dime, just because we had taken the time to get to know him and he wanted to make sure our time was memorable and easy. Since our trip, Eddie has moved to Jiko, an even more upscale restaurant in the same resort. Apart from his culinary skill, which is formidable, it’s clear to me why he was promoted.

[LEGAL DISCLAIMER SENSIBLE PEOPLE DO NOT NEED: We did not ask Eddie to do this and Eddie is not required to do it for you. Nor is any other Disney chef. We had simply been nice to him in the past and he chose to be nice in return. We have witnessed a surprising number of Cast Members respond with over-and-above generosity and gratitude when shown a little kindness and interest in them as people. To me, this suggests those are things they don’t get much of. END LEGAL DISCLAIMER]

Onward to the Magic Kingdom and Mickey’s Christmas Party.

So, having already donated bone marrow to purchase your park admission tickets, you now more or less agree to let the Walt Disney Company sell up to two of your non-essential organs. In exchange for this, they give each member of your party a small, green wrist band that looks a little too much like a hospital admission bracelet. This is an important item it turns out, because at some point during the early evening, the Cast Members start kicking out anyone who doesn’t have a one. Suddenly all these dedicated Disney-goers find themselves badly wishing they too looked like recently recovered medical patients.

Inside the park there are snack stations, as mentioned, each one helpfully marked by a large, inflatable bathroom scale. 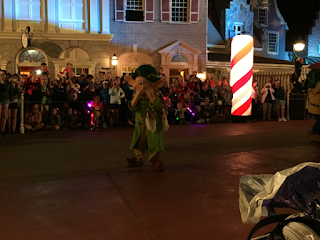 Each one has a different variety of snacks and drinks, all available in unlimited quantities for nothing but the paltry entry fee we already discussed.

There are other unique aspects, too. There is the Once Upon A Christmas Time parade that you can only see during the Party. It features a lot of familiar and expected Disney faces, but also a few things you don’t often see. Clarabelle the Cow baking Christmas cookies, for example. 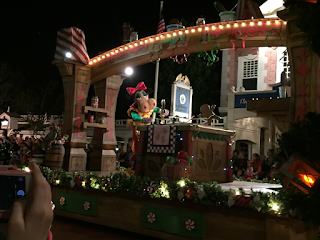 I am not sure why, but for some reason Disney seems to be trying to orchestrate a Clarabelle Comeback. Maybe I’m just not the visionary type, but I don’t see it happening.

There were also some very fun Christmas Dancers I did not get any good pictures of, so here’s a passable one. 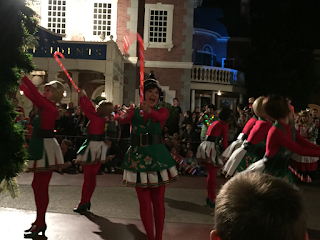 There were several unique floats we hadn’t seen during any other parade. And of course, the Big Guy. 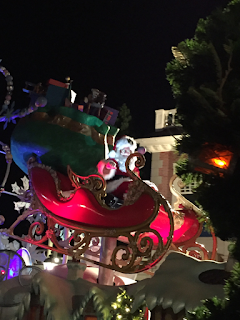 There wasn’t anything wrong with my camera. It turns out Santa is actually a little out of focus in real life. It’s his age, I think. Have you ever noticed how really old photographs never look all that sharp? Apparently, it was the subjects’ fault, not the equipment.

Anyway, there are of course also several character meet-and-greet stations. These are always a hit with the kiddos. They are also a hit with adults who, for reasons that are absolutely, totally fine, like to join in pretending the 20-yr-old actors signing an endless stream of autograph books actually are corporeal manifestations of cartoon characters.

We met Rapunzel and Flynn. Both were very sweet and very fun. The Little Guy got tips on The Smolder. 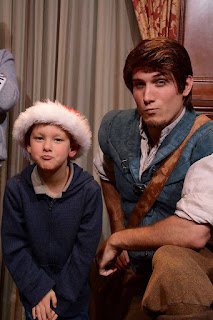 The Castle Lighting was a sight to behold. It begins with a show on the Castle steps starring the Frozen characters. It culminates with Elsa, as the name suggests, lighting up the Castle. I will grant you that doesn’t sound terribly exciting. I get it. But bear something in mind; we are experienced, hard-bitten, grizzled Disney veterans. We are not easily impressed. We have been to Disneyland and Disney World. We have been on two Disney cruises. We have seen all the fireworks. We were at Epcot during its anniversary month, we have talked to Mickey, been the Grand Marshalls of the Festival of Fantasy Parade, I’ve been the Veteran of the Day (invited twice), we’ve been onstage at the start of the Indiana Jones show, we have Bob Iger on speed dial, etc.

The point is, we have seen it and done it, whatever it is. And yet this was an absolutely stunning light show. Truly. We were very impressed.

I have many pictures and even a video. They won’t do it justice, so instead here’s a nice shot my daughter took during the fireworks finale, which was also truly excellent. As for the rest, you’ll just have to take my word for it until you’re ready to put some of your own organs up for sale. We can’t spare anymore of ours. 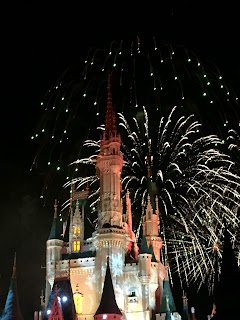